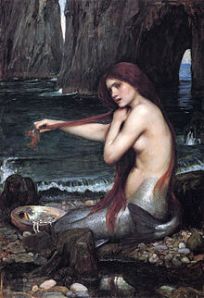 According to Ron Padgett in The Handbook of Poetic Forms, a ‘Cento (from the Latin meaning ‘patchwork’ )is …a poem made entirely from pieces of poems from other authors’. I’ve been seeking out my favourite translated poems so today I’ll extract random lines from a lovely collection, ‘The Fifty Minute Mermaid’ by Nuala Ni Dhomhnaill (translated by Paul Muldoon).

The picture is ‘A Mermaid’ by John William Waterhouse.

‘A shiny film. Dripping Stuff. Dripping wet’
In the long months
that followed.
He didn’t tell anyone which of the three women would die.
I was wading across the Nath one day.
She’ll never again hear the loud neighing of the kelpie.

She thinks that if she covers her ears and turns away her head.
When the mermaid found her going out with the boys.
The female merfolk have a child every year.
Some of them are even considering building an ark.
They lay the blame on outside influences.
With red hair. Too fine altogether she was.

She left no stone unturned.
Quaking aspen trees and firs, or just the willow scrub.
There was a woman from Ferriter’s Quarter
coming up the road towards her.
Cleaning her teeth with a thick brush.
Such was the case with Peg Saiers on the Great Blasket Islands.