I have failed at blogging once a week as I thought I might. It could have been done but, all too often, I freeze and think, well, what’s to say? Yet I enjoy reading regular posts from friends, like Jayne Stanton, who, this week,  shows us a photo of her writing journal. Like Jayne, I have once again joined Carrie Etter‘s NaPoWriMo group on Facebook. so far, so good. I have managed to write a poem from each of Carrie’s prompts in order! This has proved to be a useful discipline. Last year I bobbed about with them; sometimes went over to the Poetry School’s prompts, which was all fine but this year I wanted something more systematic. I have been taken in some surprising directions already. Like Jayne, I like the fact that we don’t post poems but just say whether we’ve completed the prompt or not – and ‘or not’ is fine. There is always leeway to catch up and to go ‘off piste’. The really good thing is that we have come together in the group as writers and what we say reflects the typical ups and downs of a writer’s life. I’m away next week so it will be more difficult to complete the prompts – but I do like a challenge! 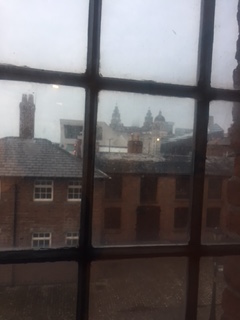 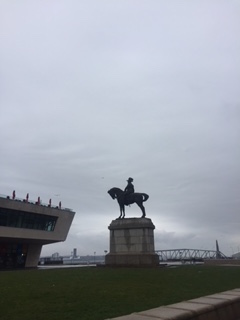 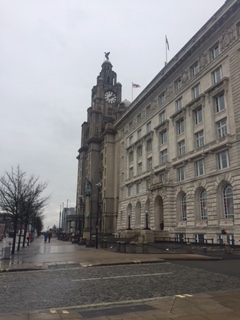 I’ve been in Liverpool this weekend. It’s not a city I know very well but each time I gravitate to Pier Head and Albert Dock. It was tipping down when I arrive. I got drenched walking from Lime Street Station trying to find my hotel, but I dried off (a bit!) and ventured out for a walk later. The rain had stopped but it was hazy and grey across the Mersey and the river was swollen and forbidding. But there is always such an atmosphere – Liverpool flings its history at you from every corner 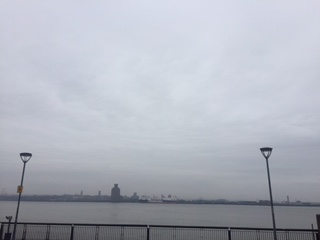 I ate my sandwich near where a couple were fastening a love-lock to railings that keep the public falling into the river. I’d seen love-locks before on Brooklyn Bridge – a tradition I think started in Paris, and was rather envious to watch the ceremony.  But the main reason I was in Liverpool was to attend the launch of the third issue of the beautiful journal, Coast to Coast to Coast. This is the loving work of poets Maria Isakova Bennett and Michael Brown. Maria is a poet and artist and painstakingly hand-stitches the covers of each magazine. We lucky contributors could choose the colour of the cover of our personal copy – I chose purple. The launch was held in a house in the Georgian quarter of the city and it was a lovely, convivial gathering with some excellent readings. It is testimony to how much people value Maria and Michael’s hard work that poets had travelled quite some distance to be there. 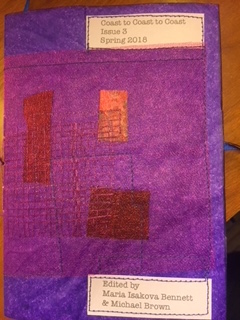 I have been doing some readings from my new collection, Strange Fashion. The first event was at  States of Independence at De Montfort University. ‘States’ is a yearly showcase of independent presses, workshops and readings. I always come away with literary purchases and a list of names to follow up. It was lovely to see some friendly faces in the audience. Next was a reading for Wordplay at the Square Chapel in Halifax. This is an event hosted by Keith Hutson and also featured poets Judith Willson, Nick Allen and Clare Mulley. I’m very much looking forward to reading at the Pighog event in Brighton, hosted by Michaela Ridgeway, on May 31st. One of the poems from my collection, ‘For Those Who Walk Pavements’, was discussed by some of the English staff at Loughborough University on their new podcast. Thanks go to Kerry Featherstone for that. The whole podcast is well worth a listen. The theme is ‘Spring’! Here’s the poem.

For Those Who Walk Pavements

If not praise, something like a thought or two

for archaeologists who dig up car parks

searching for the bones of a king

and for the council worker sweeping dust

and dead leaves with an edgy sway,

as commuters look away. Watch

those involved in text spats

with boy or girlfriend; the woman

who stops and holds up her phone

as if it were a chalice and she sought

to quench her thirst; those who read

the pavement cracks and stones;

who walk as if on air, or weighed down

by something shocking left over

from their dreams. Spare a thought for the wanderer,

meanderer, the blinkered, the lost.

Spare another thought, light a candle,

for those who travel without compass

or map, who leave the house with vague intentions,

an idea of destination, yet happily drift off course.

I love the overlap between art and poetry