This is a photograph of sculptor Sean Hedges-Quinn’s bronze statue of suffragette, Alice Hawkins, which was unveiled in Leicester’s Market Square last Sunday. More than a thousand people turned out on a freezing afternoon for the unveiling to mark the centenary of the 1918 Representation of the People Act. It was a rousing occasion with speeches, songs and the presence of Alice’s relatives. Alice lived most of her life in Leicester and worked in a shoe factory. She took part in direct action and was imprisoned for it. It was a moving occasion and it has been good to read of other events marking this significant centenary. Here are some more  poems written about suffragettes, by Kim Moore and John Foggin, and another from Anna Kisby’s terrific pamphlet, All the Naked Daughters from Against the Grain Press :

When I hold your purse in my hand –

a Derby pass, hate-mail hoping you die

and a flag folded against the grain

to show its bloodstain –

Your purse is warm

as a thing just-caught.

When I roll its clasp undone

between index-finger and thumb

from the kerb into a traffic roar.

I lay it in a perspex case

flanked by what it last held.

An outbound, its torn edge

The reason this poem is so effective is that Anna Kisby, poet-archivist,  is attentive to detail of objects and how to intensify the emotional impact they had on her without over-exaggeration.

My poem here isn’t about a suffragette but it is about a remarkable woman, Dorothy Hodgkin, pioneer in X-ray crystallography, is the only British woman to have received the Nobel Prize in chemistry in 1964. My poem was written in response to Maggi Hambling’s 1985 portrait of Dorothy Hodgkin which is in the National Portrait Gallery. I loved this vibrant, positive image of an older woman engrossed in her work. A version of this poem was first published  in Images of Women; an Anthology of Contemporary Women’s Poetry, edited by Myra Schneider and Dilys Wood, 2006, Arrowhead Press. 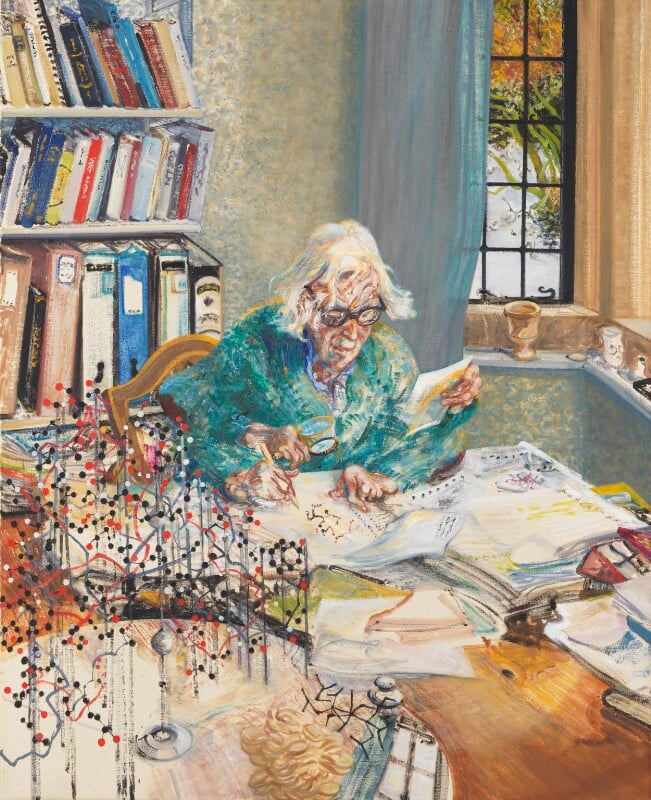 A woman writes at a desk in a study. Furiously

awake at five a new theorem buzzing, she constructs it

with her pen – Three-Dimensional Structures

in X-Ray Crystallography Her hair is electromagnetic:

why brush it, it is white thought. Behind her a model:

molecules, a tree of them, primaries, red, yellow.

Today is blue. She allows it to happen. This is not

a woman writing her memoir. She is writing off the edge

of the planet. What mirror? What toothpaste?

her sweater, glasses, the lines on her face.

This hour could have been a century blasting

away a stockade of men in white coats.

Today she is eighty-five. So much to do. So far to go.

I shall go on enjoying all the coverage of inspirational women and hope this current groundswell will signal a push to overturn inequities that still exist.