The sun is returning even though it might seem that it’s getting dark around 2pm. People of different cultures have long practised various rituals to welcome the sun such as the one practised by the Druids at Stonehenge, a place built within sightline of the solstice sunset. In Iceland, locals celebrate ‘jólablót’, a pagan holiday marking the winter solstice with a feast. In Nova Scotia, some celebrate the solstice with a lantern walk.  In Ireland, apparently, many enter a lottery to win the chance to stand around the Newgrange stone and bang drums to greet the sun. I took this photo on Greenwich Park earlier this week- not the actual solstice but an 8am frosty sunrise which had that feel. 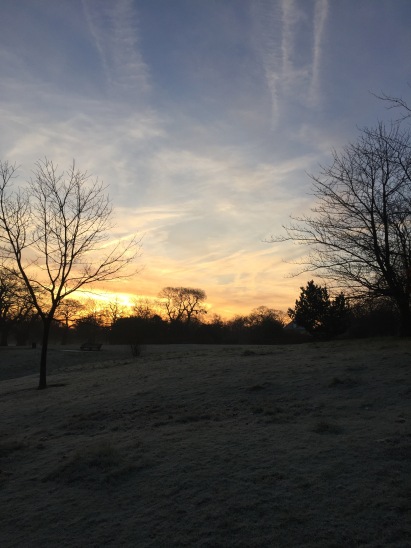 Four years ago I set out with filmmaker Keith Allott on this day to make a film of the light gradually disappearing. The idea was that Keith would shoot footage and that I would write an accompanying poem. We set out about 2pm when there was blue sky and walked around Leicester, stopping every so often, when, at my direction, Keith would set his camera up to shoot, say a trail of smoky clouds; the moment when car-headlights started to come on, heralding the dusk; from the top of a building, the comings and goings in a block of flats, and the derelict hosiery factories.  This meandering was better than the last hectic scrum of Christmas shopping. We finished our walk at about 8.30pm. Our last filming was by the canal near Castle Gardens where ghostly swans trailed the shattered gleam of street lights through the black water. I realise now that we were performing a ritual to welcome back the sun: those glimmers of light on the water symbolised its return.

It took me quite a while to settle on that poem and, in the end, after several redrafts, I went with my original, quite spontaneous one, which, unusually for me was improvised and spoken: I only wrote it down afterwards. Here is the resulting film-poem, Chasing the Sun. Here is another poem based on that day, from my new collection Strange Fashion which is now available from the wonderful Pindrop Press. Happy Solstice!

The Sun (her Ex) on the Shortest Day

You sloped back, I made you wait,

oh, how I made you wait. At the top of the Phoenix Cinema

you were the kid who shouts Look mam!, is ignored.

The sky jigged behind its dingy bath towel. The digital clock

The Lithuanian church sparked silver like a Plantagenet crown.

A satellite tracking your temperature, weight and height;

wondered where you’d gone. Dirty stop-out, you crouched in a stairwell,

wasted from dog days. Even so, the sky danced itself into unseasonal blue.

You crouched, I watched scraps of cloud; people in flats hanging out washing,

moving through rooms; then later, car headlights, pretending to be you,

tiny white bulbs in the tree outside Matalan.

Faking it, window by window: the glint of your stalker attentions.

on the back of my neck in the middle of my forgetting.