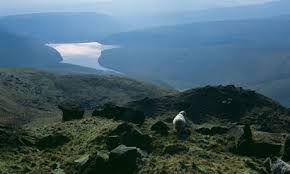 I’m a fan of Morgan and was interested to hear that some of his most passionate, urgent poems-for instance, those to lovers-were written when he was in his eighties. Jackie Kay reads out 2 poems to a man called John in which Morgan expresses his love, and some regret too that this came so late. He didn’t come out as gay, apparently, until late in life, and did so in outrage at the oppression of Clause 28. She notes the freshness of the language, its naturalness-how Morgan now felt he could just speak directly and truly. How sad that he felt that he could not for so many years.

Here is his poem ‘Strawberries’ and my poem, written in response to it, ‘Tomato’.

let the storm wash the plates

I love the form of this, the way it opens out without punctuation,the way the strawberries evoke time, place, mood and the way they tumble into the present, ‘let the storm wash the plates.

Makes me want to climb a mountain, be fed luscious fruits …

There was never a tomato
like the one we ate
near the top of Kinder Scout
that afternoon in March,
after the trek through fog
and peat-bogs, not a soul,
then sank into the heather.

The sun rolled across the valley.
You rested it on cling film,
pressed with your thumb
before the cut, but a plastic
knife’s no good, so you prised it
apart, held it to my lips. I tasted
seeds, flesh, skin, in that order.

Never a tomato like the one
you fed me in the sun.