I can’t believe it’s been nearly 6 months since I last posted here so I want to change that by writing about an exhibition of digital photography, ‘Constructed Cities’ and ‘Constructed Landscapes’ by Helen Saunders, more specifically about taking part in a writing workshop at Phoenix Arts led by Mark Goodwin where we wrote in response to Helen’s photographs.

This is what Helen says about her work on her web-site:

“I  am interested in the power of photography to expose and transform the mundane. In particular my work is concerned with our changing environment, where the processes of civilisation are seeping into the natural rhythms of the planet. I use photography as a means of bringing into focus spaces such as scrap yards and construction sites, the in-between points which are often forgotten, yet crucial to civilisation.

I am currently using a method of digital photo- collage , blurring the boundaries between real and fantasy. My methods reference the painted landscape, which has historically been used as ameans of re-framing nature that overwhelmed. I take inspiration from this idealised and often romanticised vision of the world, but aim to create an incongruity between reality of the subject and surface beauty of the image. I don’t intend to make polemic judgements, but provoke questions about the rate of man- made development and the implications for the future. “

Helen’s images are taken from viewpoints on the peripheries of urban life, often around old transport networks like railways and canals. Change often appears here due to the streamlining of industry and drive towards regeneration. Her digital methods reflect the act of painting a landscape and are framed by historic references to the 19th century Romantic Movement. the focus on the transformative effects of light on the natural environment conveys a sense of the sublime, something that is now present in our modern, post-industrial landscape.

At the workshop , apart from Helen, Mark  and I, were poet, Matt Merritt and visual artist, Elaine Miller. Helen spoke briefly about some of the leading ideas behind the photographs. Her constructed landscapes were somewhere between town and countryside;transient, borderline places, maybe outside civilisation, and indeed, the whole history of art.  She takes her inspiration from the sublime but tweaks it via new technologies. For instance, the image of Derby earthworks has a transplanted mountain and Photoshopped skies. 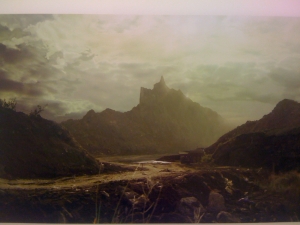 In altering ‘realities’ to provide new perceptions, Helen spoke of the concept of ‘layered landscapes’.  In a Birmingham scene, mountains point into the background, have been placed there, emphasising abrupt boundaries between what is actual, and what transpose; what is natural, and what, man-made. 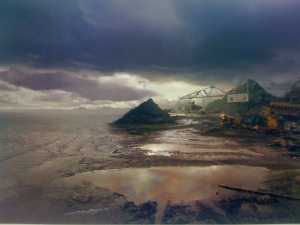 Similarly, the photograph of borderline territory on a Leicester estate has improbable layering and juxtapositions. It is not a photograph of a single moment but of various moments, at different times under different conditions. The fencing in the foreground, for instance, was not ‘found’ but was placed there like an industrial briar. The ‘realities’ presented here, shifts in light effects from layer to layer, are improbable and deliberately disconcerting. It begs the question about what we are apprehending in the act of seeing; how far we view these worlds with through pre-set lenses according to tradition and how faulty our initial perceptions might actually be. 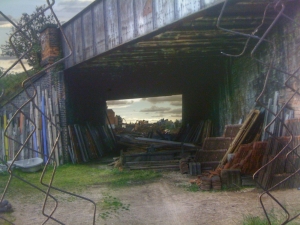 Helen said that in her work she was trying to preserve what we were losing in this layering of past and present, even if the past was only hours away in time, so that landscapes and emotions are blended.

I connected with what Helen said and her work because this is what I think I try to do in poetry; construct tweaked environments, cityscapes in particular where emotional resonance is more important than geographical accuracy. This connects also with my recent interest between links between time and space and how this might be explored in poetry and also how we see or experience the world, especially via mediating devices, e.g.the camera.

Mark Goodwin is a versatile, innovative poet and experienced leader of workshops. Mark reflected on the workshop and wrote this in his own blog about his experiences as poet in residence amongst various Leicestershire landscapes and related places .

We were invited to respond, not only to the place we were in , The Cube Gallery in Phoenix Square but to anywhere beyond it, and then, more specifically to the individual photographs. Mark encouraged us to collaborate in our reading back of individual lines so taht we produced unexpected juxtapositions of sound and image which he recorded. the process of sharing work is a powerful one  and, sonically, echoed Helen’s visual methods of layering and tweaking first drafts/ responses.

I also include other images from the exhibition. 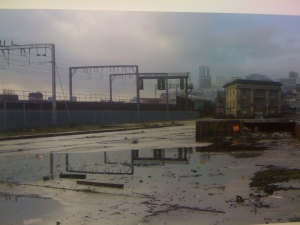 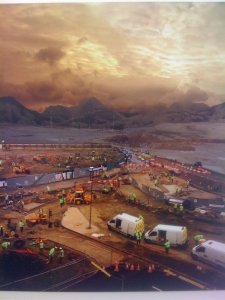 and ring-road on the outskirts of the city centre. In a white cube,

surfaces scabbed with stones’ scars and residues of storms.

its compartment of flesh is entirely insides. Tumbles, is grazed,

its people drawing their exits with trembling hands. 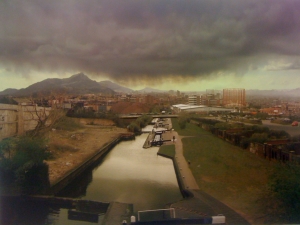 A puddle with oil-slicks on the surface. Empty truck with solid tyres.

Foliage, illuminated, pokes through an opening under the bridge.

Bunting sags under a grey sky and arches diminish in size as you look at them.

Outside the station overhead cables reappear under water.

Then, two toilets and a sink, broken fence slats.

Men in yellow flourescent jackets and white safety-helmets are duplicated

around earth mounds and craters. 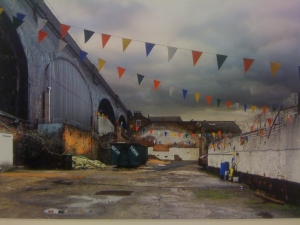 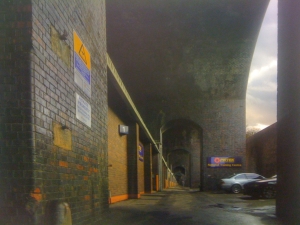 You can hear poems from other ‘Scape workshops here. mark will be putting up the work from The Cube shortly.